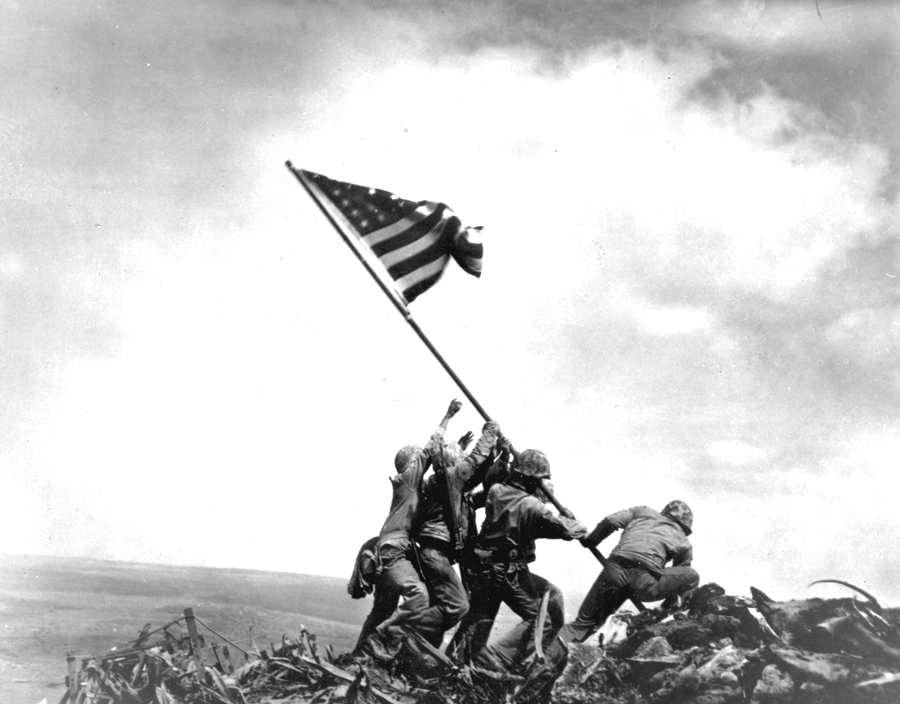 In the annals of time and history, Sergeant Michael Strank of the United States Marine Corps will forever be known as one of the six men who raised “the flag” on top of Mount Suribachi during the World War II battle of Iwo Jima.

The photograph gave hope and became a symbol of support and endurance for the United States war effort. With one click, Rosenthal captured a lasting image of Sgt. Strank, a Marines’ Marine, a beloved leader of men who vowed to do anything in his power to bring his soldiers home. To truly understand the life of Michael Strank, we must look past the photograph.

The story of this American hero, oddly enough, begins in Jarabina, Czechoslovakia where he was born Mychal Strenk on November 10, 1919; ironically the 144th anniversary of the founding of the United States Marine Corps. Mychal lived in a one room house with a dirt floor with his father Vasil, mother Martha, and extended family. Vasil, chasing the famed American dream, immigrated to the United States in 1920, changing his last name to Strank in the process.

Vasil settled in the Pennsylvania mining and steel working town of Franklin Borough, just east of Johnstown. Working for Bethlehem Steel, Vasil labored in the Cambria County mines for three years until he could afford to send for Martha and Mychal. Finally, in early 1922, Mychal and his mother were able to join Vasil in America.

The first ten years in America would be a trans-formative time for both the Strank family and Mychal. Mychal, renamed Mike, who was soon joined by two younger brothers, Jon and Pete, as well as a younger sister named Mary. Vasil was able to afford a two-room rental apartment for his growing family, seen as a castle by Martha when compared to their living arrangements in Czechoslovakia. Though the blast furnaces ran 24 hours a day and coal dust added a permanent black haze to the town, the Stranks saw Franklin Borough as a place for their children to grow and their lives to improve.

Vasil worked nights and slept during the days but stayed optimistic and saw each day as progress. Above all, the head of the Strank family loved his children, and he guided over them with a system of discipline from the Old World. The basis of which is engrained in the Marine Corps values of training: equal discipline. When one child (Marine) committed an offense, all children (the Marine’s unit) were punished. Vasil unknowingly began preparing Mike for his time in the Marine Corps by instilling in him the value of shared responsibility; the Marines’ Marine was beginning to take shape.

As the Strank family began to gain a foothold in the borough, Michael Strank’s personal transformation from a boy to a young man was unfolding. Already with a rigid sense of discipline and duty, Strank approached all things with passion and resolve. He was as fervent about the Catholic faith as he was eager to learn the English language and customs. When he began first grade, he knew no English but became fluent in it within the year. He quickly learned to play the French horn and even hit a home run out of Johnstown’s Point Stadium. He saved his brother John from a nearly fatal mining accident and calmed his younger brothers during the Johnstown Flood of 1936. He was a tutor, mentor, brother and friend. That was Mike.

The Strank family was flourishing now, renting out a five-room duplex while living in one of their own. Vasil and Martha had truly achieved the American dream; then the Great Depression found Western Pennsylvania. Wages were low, workers were striking, and Vasil lost his job. Sadly for a gifted boy like Mike, college was now out of the question.

Mike was looking for work and found it in one of the many programs created by Franklin Delano Roosevelt’s New Deal. In 1937, Mike joined the Civilian Conservation Corps (CCC), a governmental organization that worked on projects ranging from roads to national parks. For 18 months he worked across the country in places such as Arizona before eventually coming back to Pennsylvania to work on highways. Much like Vasil’s system at home, the CCC exposed Mike to a military-like regimen complete with camp life, discipline, and comradery. Though denied an extension with the program, the CCC had turned Mike from a 140 pound boy into a strapping 180 pound man. A man, full of passion and the desire to do what was right, had only one place to turn.

The year was 1939 and Hitler’s Nazi Germany was on a war path through Eastern Europe, i