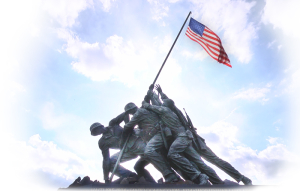 A Marine’s Marine, The Story of Sergeant Michael Strank

This Lesson Plan aligns with the following Pennsylvania Academic Standards:

CC.8.5: Reading Informational Text
Students read, understand, and respond to informational text – with emphasis on comprehension, making connections among ideas and between texts with focus on textual evidence.
CC.8.5.6-8.A
Cite specific textual evidence to support analysis of primary and secondary sources.
CC.8.5.6-8.B
Determine the central ideas or information of a primary or secondary source; provide an accurate summary of the source distinct from prior knowledge or opinions.

CC.8.6: Writing
Students write for different purposes and audiences. Students write clear and focused text to convey a well-defined perspective and appropriate content.
CC.8.6.6-8.C
Produce clear and coherent writing in which the development, organization, and style are appropriate to task, purpose, and audience.
CC.8.6.6-8.G
Gather relevant information from multiple print and digital sources, using search terms effectively; assess the credibility and accuracy of each source; and quote or paraphrase the data and conclusions of others while avoiding plagiarism and following a standard format for citation.
CC.8.6.6-8.H
Draw evidence from informational texts to support analysis reflection, and research.

8.1: Historical Analysis and Skills Development
8.1.8.A
Compare and contrast events over time and how continuity and change over time influenced those events.

8.3: United States History
8.3.8.A
Examine the role groups and individuals played in the social, political, cultural, and economic development of the United States.
8.3.8.B
Evaluate the importance of historical documents, artifacts and places critical to United States history.
8.3.8.C
Summarize how continuity and change have impacted U.S. history.
• Technology
8.3.8.D
Examine how conflict and cooperation among groups and organizations have impacted the growth and development of the U.S.
•Military conflict
•Economic Stability

The Next Page: Victory at Iwo Jima Article by Bill Zlatos in the Pittsburgh Tribue Review, May 29, 2016

Real true heroes are not often found. Men and women of high integrity and incredible honor, whose actions are as awe-inspiring as they are virtuous, seem to be more fable than fact. So when you encounter a person in history, a person who was clearly put on this earth to do good, you naturally want to dig deeper. Michael Strank is that person, that hero. As a beloved son of Cambria County, his story MUST be told for generations to come. As a teacher, you have the opportunity to do this.

It just so happens that Strank’s life story placed him right in the middle of one of the most reproduced images of all time: Raising the Flag on Iwo Jima. When AP Photographer Joe Rosenthal pressed the shutter of his camera on Mount Suribachi, the image of Sgt. Michael Strank and five of his brothers-in-arms swept our nation as a symbol of dedication and perseverance. The photograph was in every newspaper in America, and served as the spark that re-ignited a resolve and deep sense of patriotism that lasted until the end of the war.

Raising the Flag on Iwo Jima was the centerpiece of the Seventh War Loan Drive. This drive raised $26 billion in just six weeks. It was crucial as it was this money that kept the United States focused on winning the war in the Pacific.

Marine Sgt. Michael Strank would have been treated like American royalty if he had left the tiny island of Iwo Jima, but that was not to be. Less than two weeks after the photo was snapped, Sgt. Strank was killed by artillery fire. He died without ever knowing the powerful effect his actions had on millions of Americans, including those in his hometown – Franklin Borough, Johnstown, Pennsylvania.

The goal of this lesson plan is to finish the story of Michael Strank, to demonstrate that he was more than just one sixth of a photograph, more than just a hand steadying a flag pole. He was a devoted son, a caring brother, an inspiring friend, and, most of all, he was a Marine’s Marine.

Suggestions:
How to Use this Lesson Plan


Ideally, you would be utilizing this lesson plan during the heart of a unit on the Pacific Theatre during World War II.  This three day lesson would serve as a nice featurette on the story of the flag raising and the local hero behind it. If this were the case, your students would be aware of the events leading up to the Battle of Iwo Jima and the motives that drove both sides to this tiny island. They also will understand the situation back in the United States, including the general weariness of war and diminishing returns from six previous war bond drives.

Realistically, we understand that many teachers considering this lesson plan are not in the situation described above. Most will treat this as a mini-lesson that can be taught preceding events such as Michael Strank’s birthday, the anniversary of the flag raising on Iwo Jima, Veterans Day and Memorial Day. If this is the case, it is very difficult to assess exactly what knowledge base your students are coming in with.  I would suggest surveying your classes, or starting a KWL chart in order to formulate some understanding of their familiarity with the Battle of Iwo Jima and Sgt. Strank. Then using that data, build an introductory lesson or even a quick anticipatory set that can bring your students up to speed. Obviously this doesn’t have to be flashy or even rigorous, but it should be effective enough to cover the following points:

·         While you could easily quiz your students as a way to evaluate what they have learned, that method of assessment does not seem to quite fit with Sgt. Strank and this lesson plan.

·         For the last three days, your students have gotten to know and appreciate Sgt. Strank as not only a Marine’s Marine, but as a hometown hero and a truly honorable man. Though his life and legacy have clearly been celebrated and appreciated by many (as evident by Day 3’s lesson), I believe there is always room for additional acts of commemoration.

·         The goal of the Thank You Sergeant Strank – Tribute Project is for students to use their newly acquired knowledge to devise, design, and create a tribute to Sergeant Michael Strank. The project itself is really only limited by student imagination, but as the teacher, you can set guidelines and create rubrics as needed.

·         Student tribute projects may include, but are NOT limited to:

Thank You Letters
Poems
Posters
Drawings, Sketches, Paintings, and other Artwork
Physical Memorials
Exhibits in a Classroom or a School Display Cases
·         Ideally, this project will allow student creativity to flow and stimulate the minds of Cambria County’s youth as they find new ways to honor such an important figure in our nation’s history.